Anthropology is a social discipline that can be considered to have appeared in the 19th century, with the first evolutionist models of Morgan and Tylor. Since then, it has undergone an evolution through historical particularism, functionalism, and structuralism to the most contemporary schools. The ontological turn, despite being controversial, is a very novel theoretical orientation that can shed some light on other possible ways to relate to the environment, through knowledge of the ontologies of indigenous peoples. The main purpose of this article is to clearly present this anthropological school and make it easier for the reader to understand it, so that they question their own categories of thought and discover other possibilities of relating to the environment.

The development of the ontological turn finds an important basis in the perspectivism and multiculturalism of indigenous America. Perspectivism, as its name suggests, assumes that the perception of reality varies depending on each perspective. In this context, that would mean that every animal, plant (in short, any non-human being), would have, indeed, its own world view, as valid as ours, but different. This way of understanding other beings grants them, in the symbolic universe, a greater right to be respected, because it brings them closer to the human beings. Since they appreciate the world (albeit in a different way), they are more complex.

And how can this perspectivist approach be related with multinaturalism? Western society perfectly understands the multicultural essence of the world. Humans, by nature, have created an enormous variety of cultures, different from each other. Therefore, multinaturalism would mean that there can also be an unimaginable variety of worlds, of natures. How the world would change would depend on the eyes with which you look at it, or more specifically, the body with which you relate to it. As an example, since a bird has wings to fly, its perception of what the top of a tree is is very different from ours. This could explain any animal behavior that might seem absurd. It is simply a way of relating to a completely different environment than the one we see.

But going further, the ontological turn was developed as an extension and deepening of these concepts. The concept of ontology comes from the ancient Greek [ontos] entity and [logos] knowledge. The ontological turn in anthropology is the focus on the study of the relationship of human beings with other non-human beings. Nature is, in the end, all the other entities (also non-living beings) that share this place called world with us. If the relationship of a society changes in relation to the other beings, all their vision of the environment changes too. Philippe Descola, a French anthropologist, tried to outline all the possible forms of composition of the world in four types: naturalism, animism, totemism, and analogism.

Naturalism is the easiest one to understand since it is the one from western capitalist society. As the diagram below explains, in naturalist societies the continuity of the beings would be only in the matter, in the physical characteristics. The atomic theory of matter (matter doesn’t get destroyed or created, just transformed) is an example of this believing in the continuity of matter. Instead, there is a discontinuity in the interiorities (or spirits). In these societies, the belief in reincarnation doesn’t exist. When the being dies, its soul disappears (in atheistic positions) or transcends, but it doesn’t reincarnate in another body. 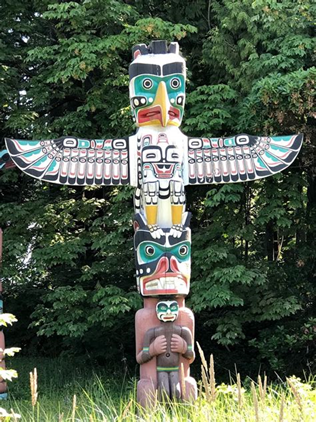 In totemist societies, there is the idea that the properties of the bodies can be transferred.

The animist societies consider that there is a difference in the physicality of the beings. When a body is lost after death, it is matter that disappears. Birth is the creation of matter. Regarding the interiorities, or the spirits, they never disappear or leave the world, they reincarnate in other bodies. Therefore, the animist societies are very respectful of other beings because they see in them their ancestors. Totemist societies would add to this cosmology the idea that the properties of the bodies can be transferred. As was previously explained, in multinaturalist conceptions, each body gives certain capacities and perspectives to the being. Thus, totemist societies, throughout the use of totems and other “embodying” strategies, aspire to obtain certain characteristics of other beings with different physicalities. Finally, analogist societies classify all the entities of the world into a multiplicity of essences, forms and substances that are autonomous from each other and have no interdependency. From there, it is possible to create a hierarchy among all beings. These four modes of composition of the world can suffer, of course, transformations and hybridizations, which would bring an almost infinite multiplicity of different ontologies.

In conclusion, what this perspective can bring us is to open our minds to different ways of understanding the environment. Of course, this is not a voluntary decision that we can make, since we are all determined by our culture. But knowing the other ontologies can make a big contribution towards respecting the traditional peoples and learning from them. Little by little, it is possible to transform our society into one that respects the environment more and lives sustainably with it.