Last March, Qu Dongyu, Director-General of the FAO, made a very concise definition of pastoralism: “a vital strategy, employed by millions of people across the Sahel to convert scarce and variable natural resources into a sustained source of nutritious food, income and viable livelihoods”. It is not only in Sahel that this strategy is important, because historically nomadic herders have had a presence in areas of almost the entire planet, with special importance in moderately populated drylands where hunting-gathering strategies have been more complicated. As Qu Dongyu said, pastoralism has the ability to make areas with scarce and variable resources habitable. As opposed to agriculture, the key element in the function of pastoralism is its great capacity for resilience, which allows people to overcome threats from the environment such as droughts or plagues. Although the adaptation strategies of pastoralism may be very interesting for another article, what will be focussed here is these communities’ relationships with grazing animals.

Human societies have always lived in contact with animals. Even today, in a time of exploitation of the environment and marginalization of animals, many people have pets such as dogs or cats. Others even ride horses for entertainment. Although these animals have a vital importance in the lives of the humans who own them, the dynamics in their relationships have changed a lot. Pastoralism is a good mirror in which to compare and observe these differences. While the person who rides a horse can only see it and interact with it three or four times a week and the one who has a dog spends a lot of time away from it (there is no intention to judge these behaviors, since they are the logical consequence of a system that requires long working hours in closed spaces), pastoralists have a close relationship with animals, which practically become life partners. To make these arguments clearer, I present the following examples of pastoralist societies in the Sahel area.

The Somalis are an ethnic group that evidently inhabits the area of Somalia. They are the best camel keepers in the world (there are around 16 million camels in Somalia). Their life revolves around keeping the camels. Their level of synergy with these animals has gone so far that, upon reaching a waterhole after a long walk without water, they are able to orderly make the camels drink just by calling them by name while singing. Camels wait their turn. The whole process takes from five to noon. 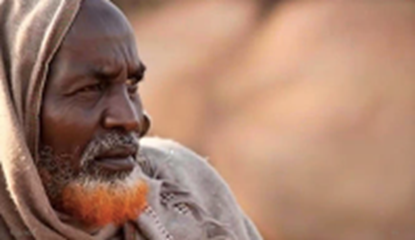 A Somali man. Somalis are the only people in Africa with red beards. They color it with henna.

Especially interesting is the example of the Dinka, an ethnic group of South Sudan whose grazing animals are cows. They don’t have any house, so when the night comes, they just put the cows in a place (around ten thousand) and sleep. Every morning, before moving around, they clean the horn of the bulls. Their relationship with their grazing animals is so strong that when a boy is born, they look for a cow and give them the same name, starting with this a relationship that will end only with the death of one. They live together and the boy has to take care of the cow every day of his life.

A Dinka boy covered in ash. They use the ash to protect themselves from mosquitoes.

The Messiria ethnicity has also an interesting relationship with cows. They are the only people in the world that ride them. As many examples could be listed there are pastoralist groups in the Sahel area, but space is limited.

Unfortunately, the nomadic dynamics of these groups, in a post-colonial context of states with delimited borders, puts at risk the situation of relative peace in which they used to live. Conflicts between ethnic groups are increasingly common and are used by political and economic powers. The protection of these pastoralist communities is urgent, not only because of the ecological importance of these groups so suitable for living in semi-arid lands and improving the levels of resilience of countries with vulnerable food systems, but also because of the anthropological importance of these alternative ways of interacting with animals, which implies that it is not necessary to reject our relationship with them in order not to harm them.